This past Sunday I took part in my first triathlon of the year.  This race has been around for 30 years and something I have always wanted to do.  The distances were longer than the other triathlons I have done - 1km swim (in a 50m pool), 26km bike and 8km run.  Over the winter months I worked hard on gaining strength and muscle as well as regularly biking and running, with a bit of swimming thrown in.

I did not sleep great the night before the race and was up at 4:45am to get ready.  I felt quite lethargic and a blood sugar check showed a high of 13.7.  Figures! As I would not actually be starting the race for some time, I took a full correction and was out of the house by 5:30am.  Grabbed a coffee on the way and got to the race start by 6:00am.  By 6:30 my sugars were at 12.0.  I had no choice but to eat my breakfast and bolus for it, fingers crossed.  Checked in, set up my transition area and then wandered around with my friend Linda before go time.  Checked my blood sugars every half hour and the numbers were not impressing me at all.  A half hour before my swim I was hovering at 14.2.  Made the decision to bolus half a unit and hoped they would come down during the swim.  No temporary basal set which made me a bit nervous.  Silly diabetes!!

I had no real time goal going into the race and thought I would be happy with a 2 hr 15 min finish. You can imagine my excitement with my 2:02:43 min finish!  Lets break this down.

I will be the first to put my hand up and say that my swim training has kind of sucked. I have been concentrating fully on running, biking and strength training.  I swam about three times per month. Not enough!  However I was still pretty happy with the swim.  I felt like I seeded myself well and overall I felt strong.  I had to pass a few people which slowed me down as I passed them at the end of the lane.  I finished the swim in 21:15.  My results show 23:15, this includes my way too long transition time of 2 minutes.  After hopping out of the pool you had to run outside, up a small hill (with thistles!), back down and to the bike.  I managed to get my bike helmet and shoes on pretty quick, however testing my darn blood sugars was a task.  The first test I did not have enough blood, the second one worked.  8.1, perfect! Threw back a shot block and ran to where I could mount my bike.

The bike course was  four loops up and down Groat Road.  It was pretty cool to be out on the bike on a road I would otherwise never ride on with traffic.  The way out was all downhill and then a climb back up.  I am definitely much stronger on going uphill than I am downhill.  I have to work on getting over my fear of crashing, lol.  My top speed going downhill was 43km/hr and I think I screamed a bit, ha ha.  I powered up the hills and passed quite a few. Looking back, I could have pushed even harder however I was trying to save some energy for the run. I finished the bike in 56 minutes, results show 58:05 to include transition.  I dismounted at the line and then you had to run a ways with your bike to get back to transition. I did not like that part as it added to my transition time.  I changed shoes, put a hat on and tested my sugars.  10.0.  I was happy with that and took off for the run.

Just like anytime I run off the bike I felt like I was barely moving, my legs felt heavy!  The run went down Groat Road into McKinnon Ravine and then back up.  4km out and back.  The run was pretty uneventful and I really enjoyed it.  I felt strong and did not have to walk.  My favorite part was the end, as you were about 150 meters from the finish there were a lot of people cheering and the announcer calls your name. I felt on top of the world!  I was shocked to see that I had finished the run in 41:24.  A pace of 5:11/km.  It felt like I was going much slower than that.  Again there were parts of the run I could have pushed harder, but I was enjoying it so much!

After I finished Ryan was there to give me a big hug.  I was so excited about how well I had felt the entire time and was super happy with my blood sugars! I finished with a blood sugar of 8.4, a bit on the high side but much better than being low.  I bolused a correction as I always do after intense exercise and went to find Linda.  Big hugs and high fives all around.  There was not much I could eat after (all gluten stuff) so I packed up my stuff, grabbed a huge coffee and headed home to eat.

This was a very positive race experience for me.  I felt strong and have definitely become fitter over the last 6 months.  I had a great time and felt very happy with my result. I know I can push a bit harder and that makes me feel good.  I felt pretty good about my diabetic management, except for the high blood sugars beforehand. This prevented me from taking in as much fuel a I would have liked.  I am already excited for my next one (which will be an Olympic distance).  Here is a picture of me after the race :) 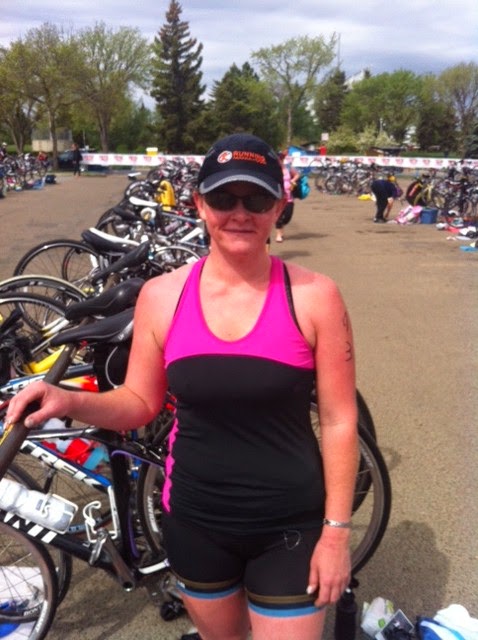