Explaining Diabetes to the Short People

I have two nieces and two nephews, all of whom I love with all my heart.  My two nieces are 12 (Sarah) and 15 (Hannah) and my nephews are 4 (Logan) and 1 (Harris).  When I was diagnosed with Type 1 diabetes my eldest niece Hannah understood what it was and my younger niece Sarah learnt a lot about it and in fact did a project on diabetes at school.  I can talk to them about it and know that they understand.  It is harder however to explain to two little guys about what is wrong with their auntie.  The littlest one Harris is too young to understand or really even notice.  I know that Logan has seen me test my sugars and take insulin but I have never known how to explain to him what Type 1 diabetes is.  Enter the children's show Caillou.

On Monday evening after my workout I had an urgent text from my brother asking if I could come watch Logan.  Little Harris had fallen and split his lip and they needed to take him to emergency (he was okay in the end).  I rushed home, packed my supper that was cooking in the oven and drove straight over.  I sat down with Logan and he asked if we could watch some taped shows of Caillou together.  I put it on and sat down to eat.  Through the corner of his eye he watched me test my blood sugar and bolus insulin through my pump.  He did not say anything but I could see his little mind working overtime.  As I was thinking of how to explain what I was doing and why, a new episode of Caillou came on called "Emma's Extra Snacks".  It was about a little girl called Emma in Caillou's class who had Type 1 diabetes!!  I whispered to Logan that Auntie J (that's me) had the same disease as Emma.  He looked at me with amazement and we watched the show in silence together.

The episode did a very good job of explaining Type 1 diabetes in a way that the short people can understand.  Emma had an insulin pump and had to eat extra snacks during the day to keep her blood sugar levels up.  The teacher explained that sometimes Emma did not have enough sugar in her blood which meant she needed to eat something and sometimes Emma had too much sugar in her blood which meant she had to take medicine from her insulin pump. When Caillou found out that Emma had diabetes he was very worried about her being sick and he thought that because she had a chronic disease she would be unable to do fun things like play on the playground and run with the other kids.  Emma explained to Caillou that she could do everything he could do, she just had to be sure to check her blood sugar levels many times a day and when they were low she explained that she felt dizzy and weak.  Once Caillou understood that Emma could manage her disease and that it was something she had to live with he relaxed and stopped worrying so much.

After the episode Logan and I chatted about it.  It went something like this:

Logan:  So Auntie sometimes you don't have enough sugar in your blood and sometimes you have too much?
Me:  Yes and depending on which one it is I either have to eat some sugar or take medicine through my insulin pump.
Logan:  And that makes you better forever?
Me:  Well not forever, it is something I have to do everyday and each time I eat.
Logan:  Are you kind of like a robot now?
Me:  I guess you could say that I have robot parts.  They help to keep me well.
Logan:  Oh, well that makes me happy.

He then inspected my insulin pump and was fascinated with the fact it was attached to my stomach.  He lifted his shirt and looked at his tummy and told me that he does not have one attached to him and neither did his mommy or daddy.  He wanted to know if he would need one one day attached to his tummy.  My eyes filled with tears and I gave him a big hug and told him I hoped he never would need robot parts. 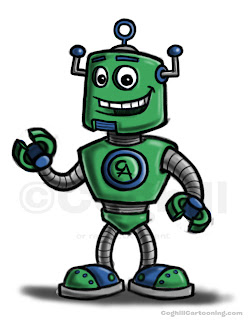