This morning when I woke up I felt like I had polished off a bottle of wine chased down by some shots, ugh.  The thing is I had not had a drop of alcohol and was suffering with only what I can describe as a diabetic hangover.

The night before I was on the phone with my Dad around 9:30pm.  That day I had ran 10km at lunch and then went to my weight/tabata class after work.  As usual I had bolused conservatively.  I had checked my blood sugar at 9:00pm and it had been a pleasant 6.1.  Perfect.  Or not!  My Dad was chatting away and all of a sudden I noticed my right hand was shaking, then I went very hot and it was like someone opened the taps.  Sweat started to pour off me.  My face, arms, stomach and legs were streaming with sweat.  I knew it was a bad one and did not bother to even check what my sugars were at.  I lunged forward, grabbed my glucose and choked four of them down.  He was still yacking on and did not notice what he was talking about until he asked me a question.  I had trouble registering what he was saying and when I tried to talk it was like I had peanut butter in my mouth.  My brain was having difficult communicating with my mouth and my body was very weak.  I tried to explain I was suffering with a bad low blood sugar and would have to go.  He was pretty concerned but I explained in a slurry voice that I was treating it but needed to lie down before I passed out.

After another two glucose tabs and some juice I was up to 5.8 half an hour later.  I felt like garbage and was completely exhausted, not to mention soaked from all the sweat.  I ate a large banana and got myself into bed to read.  I had trouble falling asleep as my mind worried about the bad low I had just experienced and my fear of being alone when this happens was strong.  Once I was asleep I don't think I moved (except once when my dog Basil fell off the bed, he must have been rolling around in his sleep).  When my alarm went off I seriously felt like I had been partying hard all night.  It took a lot of willpower to get up and ready for work.  I felt like serious crap all morning, but forced myself out for a 10km run at lunch and as predicted I feel great now.  Not sure what happened last night, but it scared me...and frustrates me.  I know that this is going to be an ongoing thing for the rest of my life and that really makes me mad and sad at the same time.

The good thing is that this kind of hangover does not require more booze or a pile of grease to feel better.  Just time, good food and some exercise :) 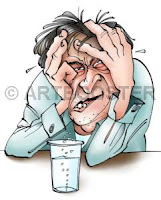